Blue Bombers’ running back Andrew Harris has been honoured by his teammates for his dedication to the game and community.

The 29-year-old Winnipegger was named the 2016 recipient of the Cal Murphy Heart of a Legend Award for outstanding sportsmanship and dedication. He is also the team’s nominee for the prestigious Tom Pate Memorial Award, chosen annually by the CFL players’ association.

“To be recognized by my teammates in this way means more than any award,” said Harris. “Giving back to the community that helped shape and mould the man I am today is just my way of paying it forward.”

Harris, who has also been named the club’s Most Outstanding Canadian, led the Bombers in rushing this year with 974 yards and four touchdowns, finishing third in the CFL, despite missing three games. He also added 67 receptions for 631 yards and a TD. 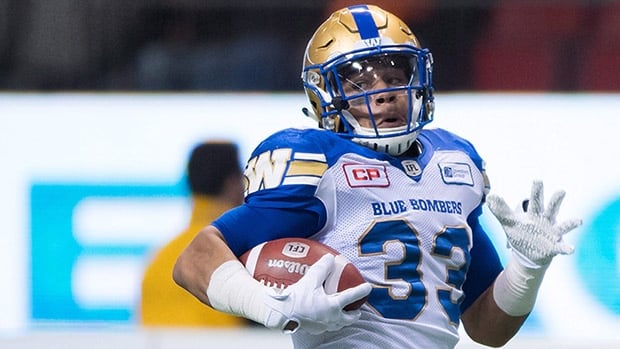 Off the field, he launched the Harris’ Heroes program to help bring teams of deserving youth to games.

“Since returning to his hometown, Harris has gone above and beyond to integrate himself into the community by attending high school football games, mentoring young players, and actively engaging with fans,” states a release from the Blue Bombers.

Murphy is second on the Bombers’ all-time coaching wins list with 86 behind only Bud Grant (102).

The Tom Pate Award is presented every year at the Grey Cup, chosen by a committee from the nine representatives nominated by their teams.

It is awarded to the player who “embodies the qualities that distinguished Tom Pate; qualities that recognize a player with outstanding sportsmanship, a player who has made a contribution to his team as well as to his community and to his Association.”

Pate came to the CFL after starring with the University of Nebraska, and after shuffling through various teams, became a star with the Hamilton Tiger-Cats. His life ended tragically at the age of 23 in October of 1975 after suffering an aneurysm in a game and then passing away two days later.

The Bombers’ past Heart of a Legend Award winners include: